The new UK speeding laws come into effect from 24th April 2017, motorists caught speeding from this date on-wards will find themselves facing tougher new laws and regulations. In this blog we tell you all you need to know about these tough new speeding fines.

There will be 3 speeding bands which your speeding fine will fall into, depending on how much faster you were going over the actual speed limit. There will be Band A, Band B and Band C.

As illustrated in our diagram below, these are for the lowest speeds driven above the speed limits, for example Band A applies if you’re going between 31 – 40mph in a 30mph limit. If you’re caught speeding within this band, expect 3 points on your licence and a speeding fine relevant to 50% of your weekly income.

Being caught speeding in Band C will see the most severe fines. If for example you’re doing over 51mph in a 30mph, you can expect to see a fine equivalent to 150% of your weekly income and 6 points OR 7 – 56 days disqualification.

How Many Speeding Offences Are There?

Speeding offences have increased by a staggering 44% over the past five years according to data gathered by Green Flag. The council in charge of sentencing have decided to increase the penalty depending on the seriousness of the offence to ensure there is a clear fine increase to match.

So How Much Could A Fine Be?

An average salary in the UK (April 2015 national statistics) was £27,600, which means the following speeding fine could be true if you’re caught speeding:

However if you are a first time offender you could be offered the chance to take a speed awareness course to avoid penalty points.

Check out https://www.gov.uk/speeding-penalties for more information on UK speeding laws. 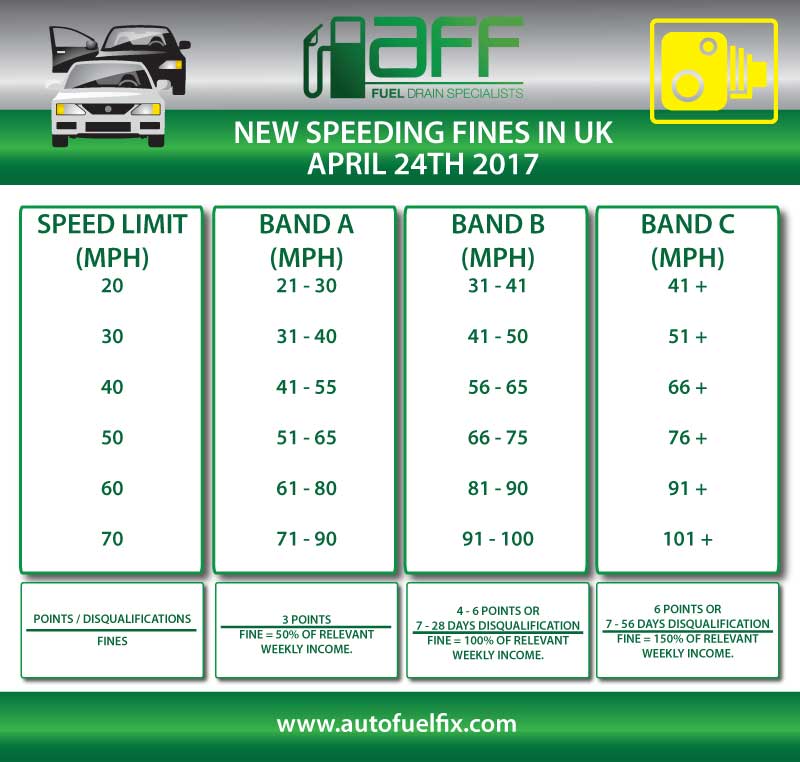